What is Multiple sclerosis?

Multiple sclerosis (MS), the most prevalent neurological disability is an autoimmune disease of Central nervous system characterized by chronic inflammation, demyelination, gliosis and neuronal loss. Although the aetiology and pathogenesis of MS remains unclear, several studies illustrate that the cause of MS is multifactorial and include genetic predisposition together with environmental factors. MS affects 2.5 million individuals worldwide. It is approximately threefold common in women than men and the age of onset is typically between 20 and 40 years, but the disease can present across the life span.

the risk factors include a combination of genetic susceptibility and a nongenetic trigger, such as a virus, vitamin D deficiency or environmental factors, that together result in a self-sustaining autoimmune disorder that leads to recurrent immune attacks on the CNS. 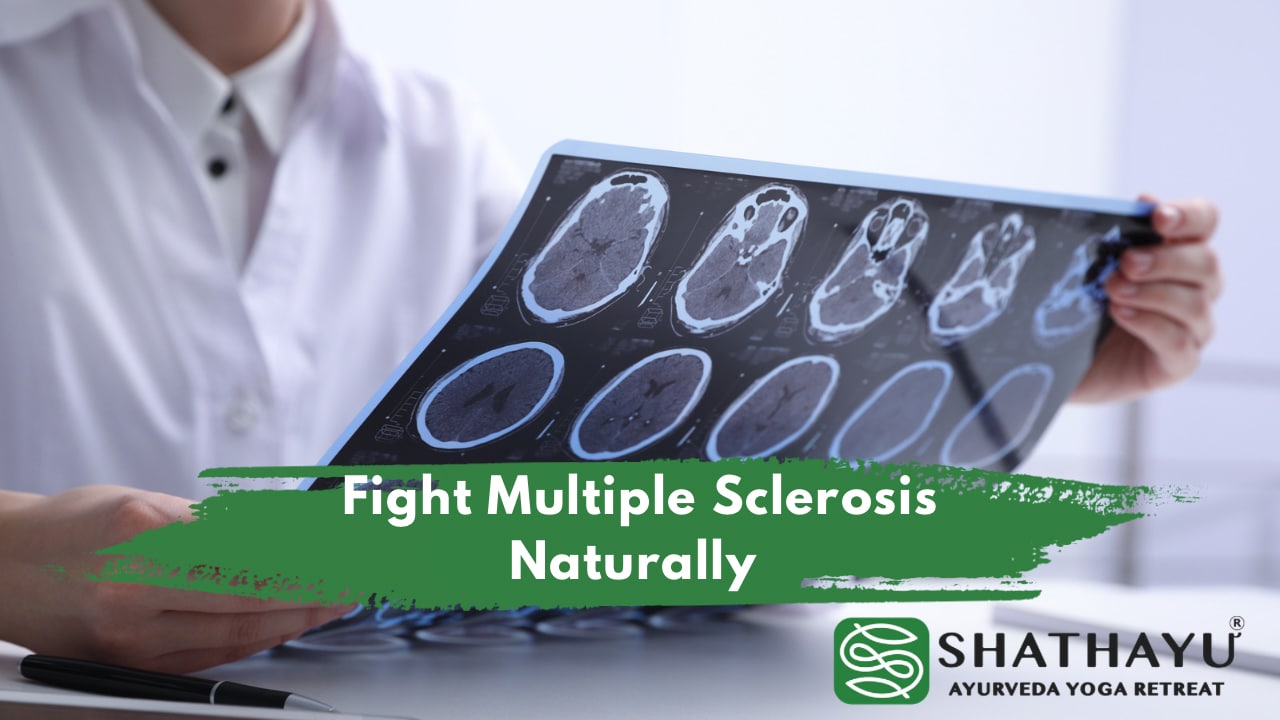 There are four main types of multiple sclerosis (MS):

The symptoms of multiple sclerosis (MS) can vary greatly from person to person and can include:

It’s important to note that not everyone with MS will experience all of these symptoms, and the severity of symptoms can vary greatly from person to person. Some people may have only mild symptoms, while others may have severe disability. 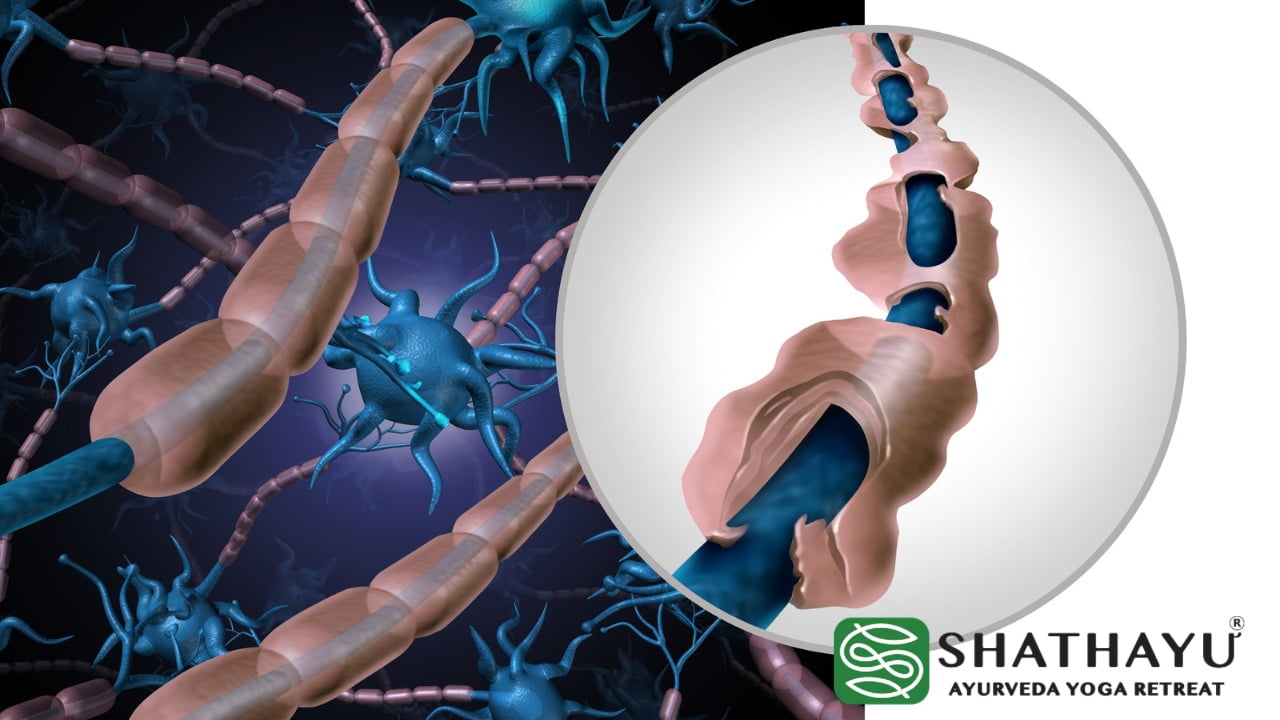 Plasma exchange (plasmapheresis). The liquid portion of blood (plasma) is removed and separated from the blood cells. The blood cells are then mixed with a protein solution (albumin) and reinfused. This is followed if the symptoms are new, severe and don’t respond to steroids.

MRI scans of the brain and spinal cord, which may reveal lesions, spinal fluid analysis, which may identify antibodies that suggest a previous infection & evoked potential test, which measures electrical activity in response to stimuli.

As multiple sclerosis cannot be compared to any prescribed condition in Ayurveda it can be considered as anukta vatavyadhi. Vata dosha having its main lakshana as gati (movement) and gandhana (knowledge perception) are generally attributed to nervous system. The symptoms of vatavyadhi are Sankocha (contraction), stambhana (stiffness), shoola (pain) & graha (spasticity) which are alike to the symptoms of Multiple sclerosis.

The inherent natural qualities and actions of vata are mainly derranged and hence normalizing this is the initial treatment protocol. Further, the etiology can be either dhatu kshaya or aavarana leading to its respective pathogenesis.  The concept of autoimmunity can be understood under the purview of aama(metabolic substances) which leads to aavarana and later dhatu kshaya. However, in case of chronic conditions or if there are repeated suppression of Ama, toxins get accumulated deep in the cells and when the level of tissue has penetrated, immune system starts to attack the affected cells. This causes inflammation or allergic reactions that without proper treatment can lead to auto-immune diseases like MS. 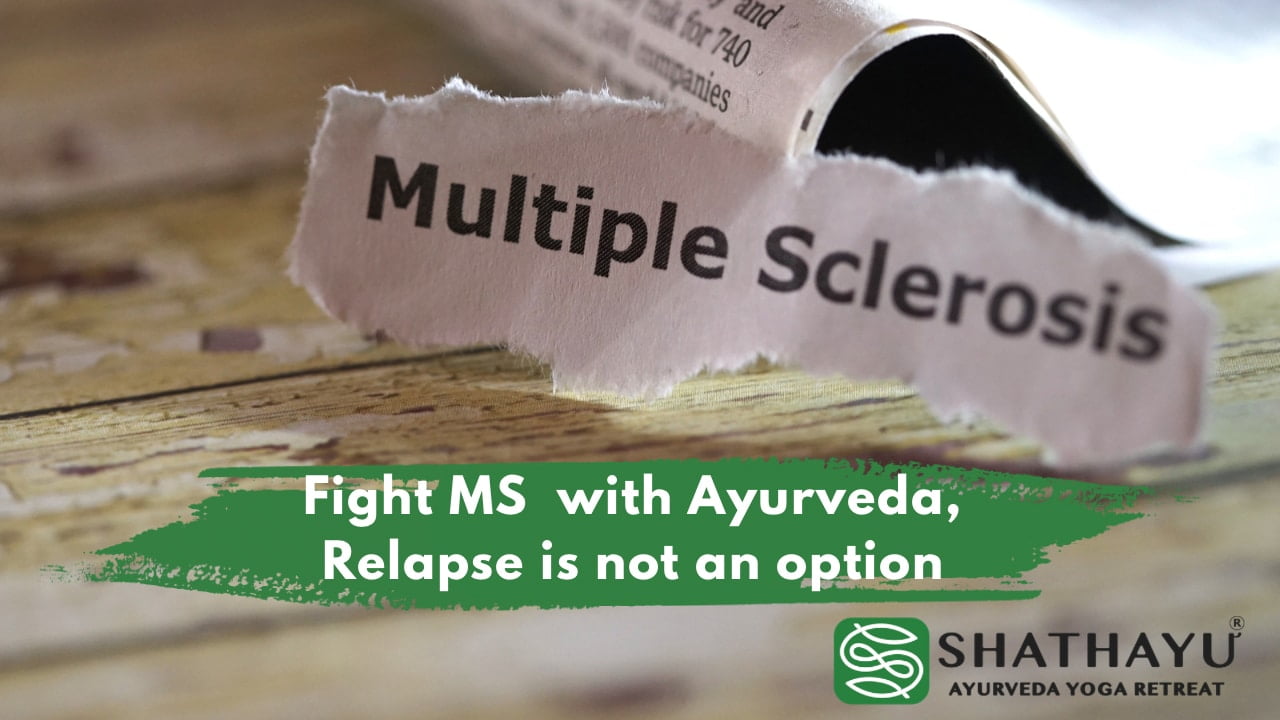 Oil massage, a common practise in Ayurvedic medicine, is a highly effective, first-line treatment for neurological disorders.Snehana (Oleation) is the primary goal of treatment, achieved via abhyanga and various swedanas (purification rituals) performed beforehand, such as the Shastikashaali pinda sweda, the masha pinda sweda, and the nadi sweda.  Murdhni Taila- Shirobasti, shiropicchu, shirodhara, shiro abhyanga, and Shiro thalam are examples of treatments that are specific to Neurological conditions.

Classical Detox is admistered.Include the cleansing techniques of snighdha virechana, basti (Colon therapy), and brihmana Nasya. The goal of medicating for Avarana should be to purge the srotas. To restore Vata to its natural course, a number of Panchakarma treatments are predetermined.

Rasayana is a crucial step after a cleanse, as it helps to prevent a relapse.

The vitiated Vata can be balanced and the immune system modulated with the help of internal administration of formulations such as Dhanwantaram Kashaya, Astavarga Kashaya, Guduchisatva, Amalaki + yastimadhuchoorna, Dashamoolarista, Balarista, Vidaryadigritha, Rasnadigritha, Swarna bhasma. The nootropic effect is enhanced by the nervine tonic properties of rasayanas like Ashwagandha rasayana, Vidaryadhilehya, and Amalakirasayana.

Ultimately, the root cause of MS is still a mystery, but the condition does fit into the category of autoimmune diseases, and there is currently no agreed-upon method of treatment. Steroids, glucocorticoids, and interferons are prescribed for MS, but they can cause side effects like fluid retention, potassium loss, weight gain, and hepatotoxicity. Dhatu Kshayajanya Vata Vyadhi is associated with demyelinating diseases like multiple sclerosis. Patient factors allow for the planning of different treatment modalities like Shodhana, Shamana, and Rasayana. If we take an ayurvedic approach to management, we can stop things from getting worse and make people happier. Ayurveda’s diverse array of therapeutic approaches and medicinal options makes life with multiple sclerosis more manageable.